I've put my handpainted warrior on hold just now as I wanted to practice a few things before taking on an original character. Firstly, I wanted to try out a new method for blocking out characters and I also wanted to practice ZModeller. Typically I'll model bulky items such as props or armor within an external software such as Blender then import them into ZBrush for detail sculpting. However this can be a bit of a pain sometimes as the back and forth process can be cumbersome. I knew of ZModeller but hadn't used it much so I wanted to try and make an entire model and all its assets entirely within Zbrush. This way I can get a handle on it before tackling the bulky armor of my hand painted warrior.

So for this project I've chosen to make a little tribute to the Witcher Netflix show. I'm a big fan on the Witcher franchise and I've always wanted to make some sort of Witcher related art, so It's been a lot of fun so far. The Methods I've been practicing have been working out really well so far, in particular the new block-out style. I'd maybe still model complex assets in blender but most assets I think I'll use the ZModeller approach from now on. You can see some of my progress so far below. 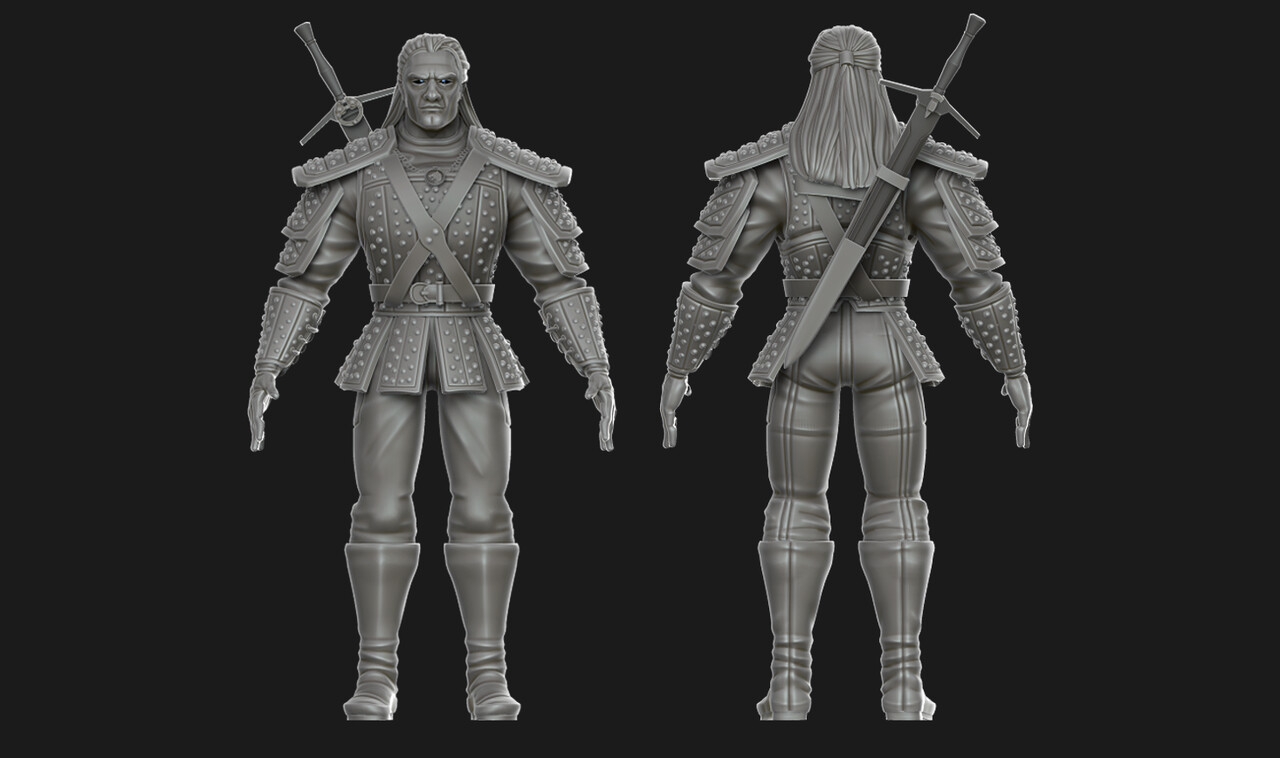 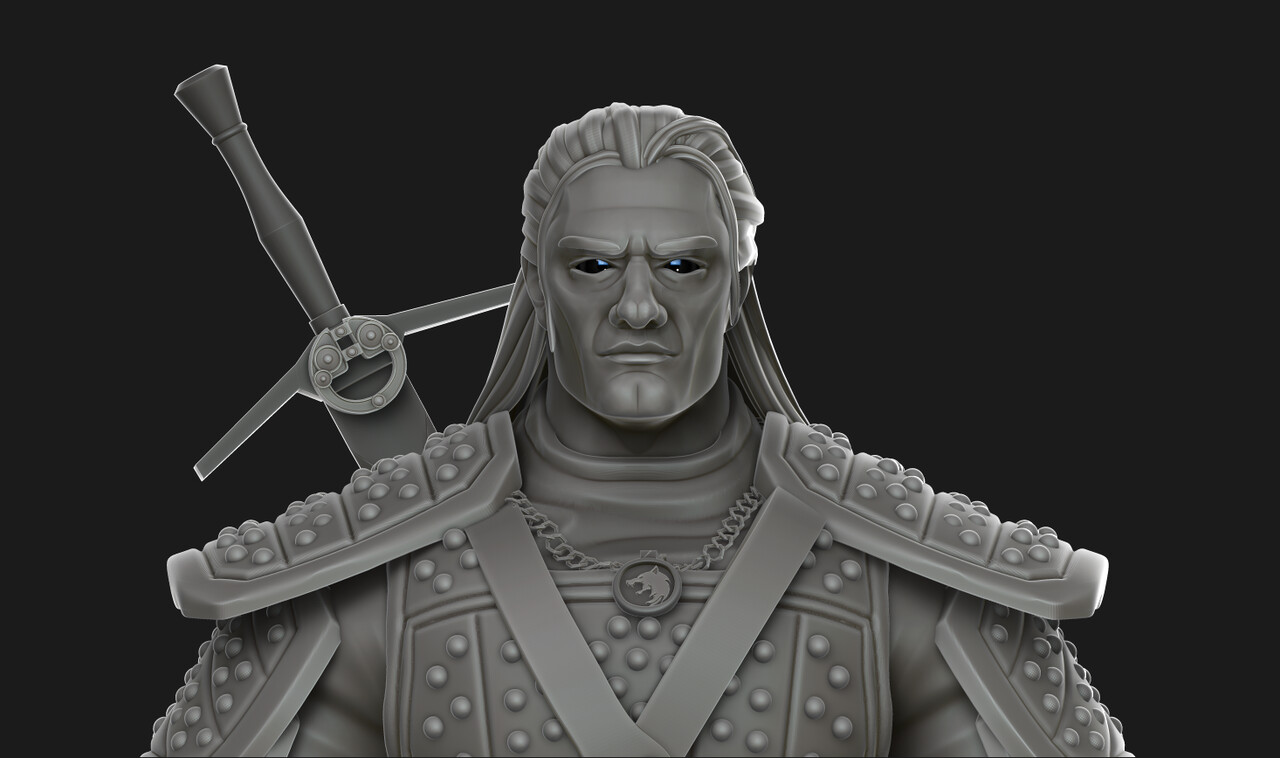 The sculpt is complete and I've just finished retopoing and UV'ing. I'm going to try baking the studs of his armor so there purely represented by the normals. However if this doesnt work out I'll just go back and replace them with low poly meshes. Really happy with how it's turned out so far. I'm going to do two alternate textures, one of Geralt in his normal state and another in his potion/toxic state. Any feedback is much appreciated.

Happy to say that the Dwarven Explorer is complete! Which also means that the Fool's Gold environment is too. Not much changed in the sculpts since my last update, mostly just scratching up a few surfaces to reduce overly simple elements as well as some small stitches on his jacket and trousers. I think I accidentally missed these details on the final ZBrush renders but they can be seen in the textured Marmoset Renders.

I initially had a dirtiness/grunge that covered the majority of his body. It can be seen in my previous post. I did this as I felt it would help ground him in the environment, as he would likely be dirty from exploring an abandoned mine. However I felt it made him...well..dirty? Basically, it ended up just detracting from the overall look, muddying details and verged into more realistic qualities. I replaced this with a more stylized approach, using flat colours that gradient in defined sections to create a stained/dirty effect. It can be seen in areas such as his boots, the bottom of his trousers, his armpits, as well as the bottom of his backpack and bedroll. I preferred this approach much more as it let me retain the "clean" look of stylized PBR while still giving a "dirty" vibe to his appearance.

Overall I'm really happy with how it all turned out. There was a lot I learnt along the way that will be invaluable in creating future characters, both PBR and non-PBR. I hope you all enjoy him too and any feedback is very much appreciated. I'll be working on a female hand-painted character next, so stay tuned for updates on that. 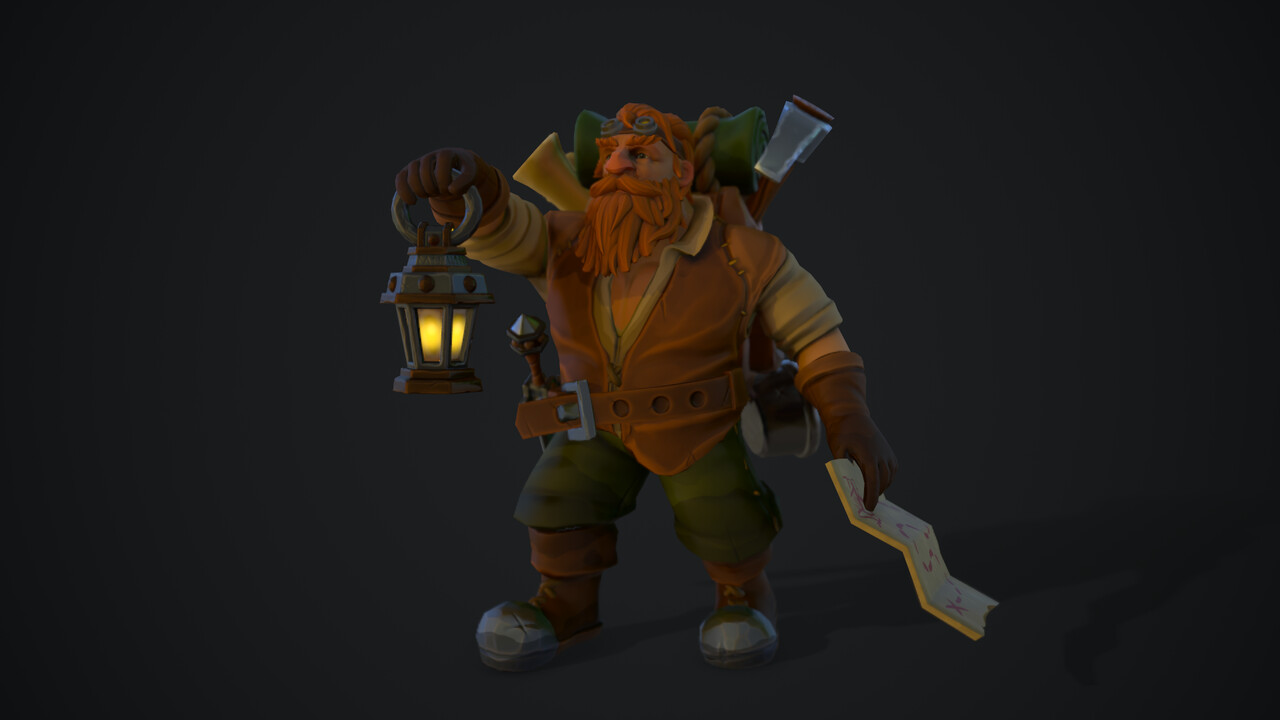 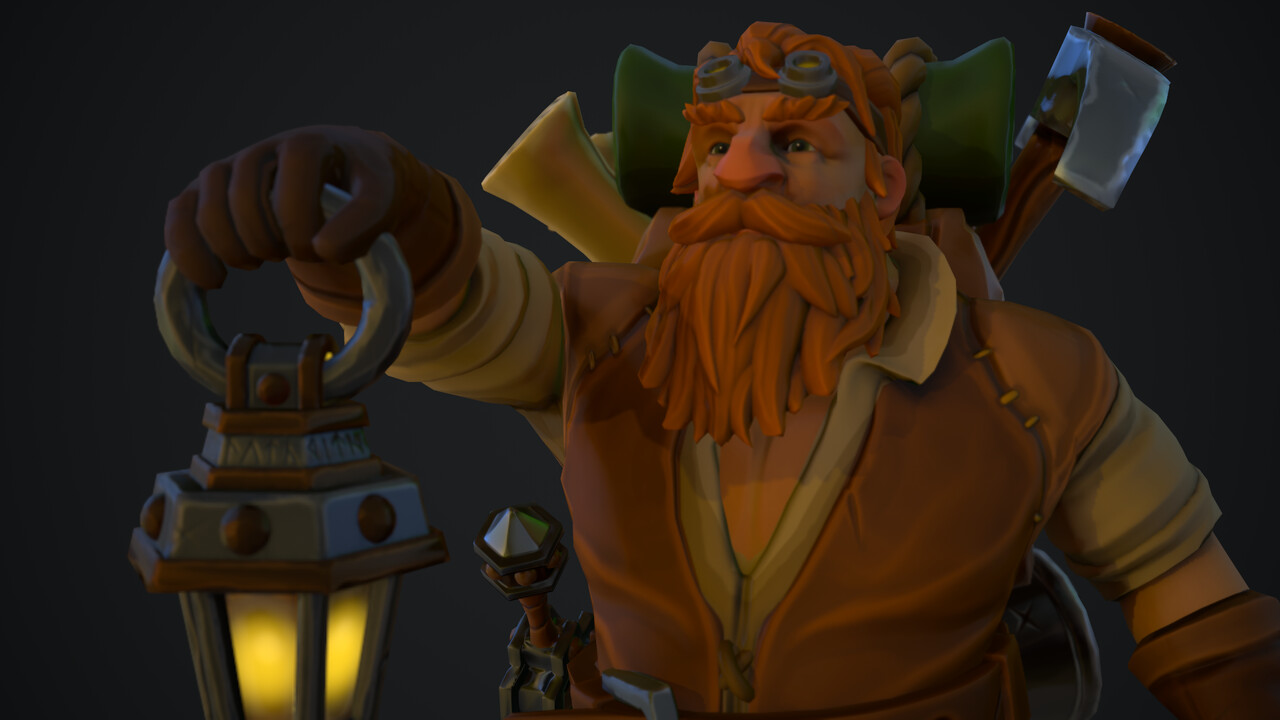 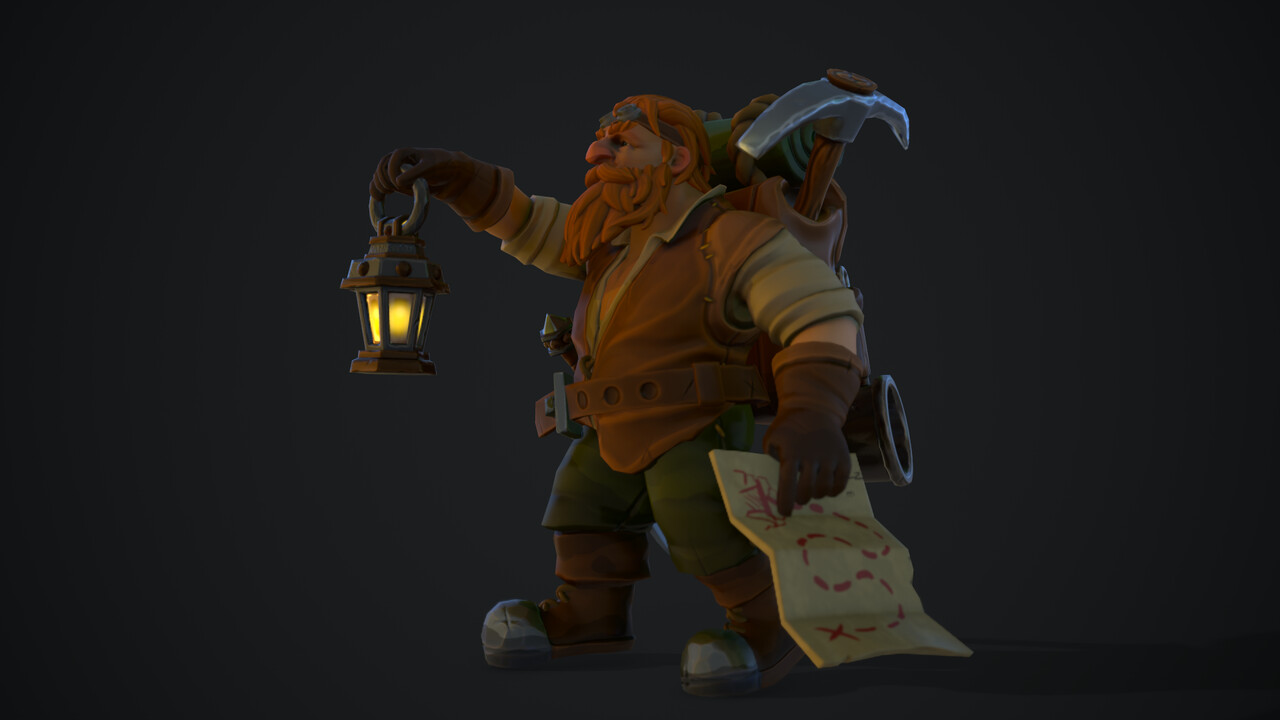 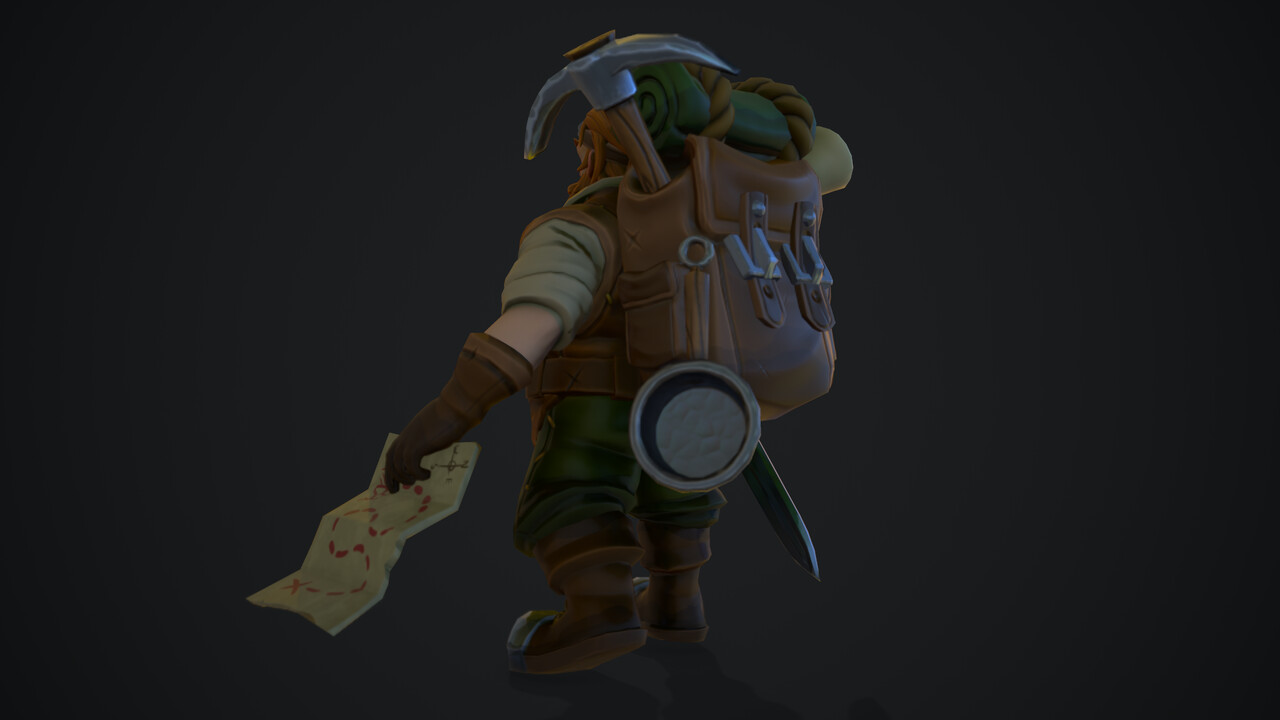 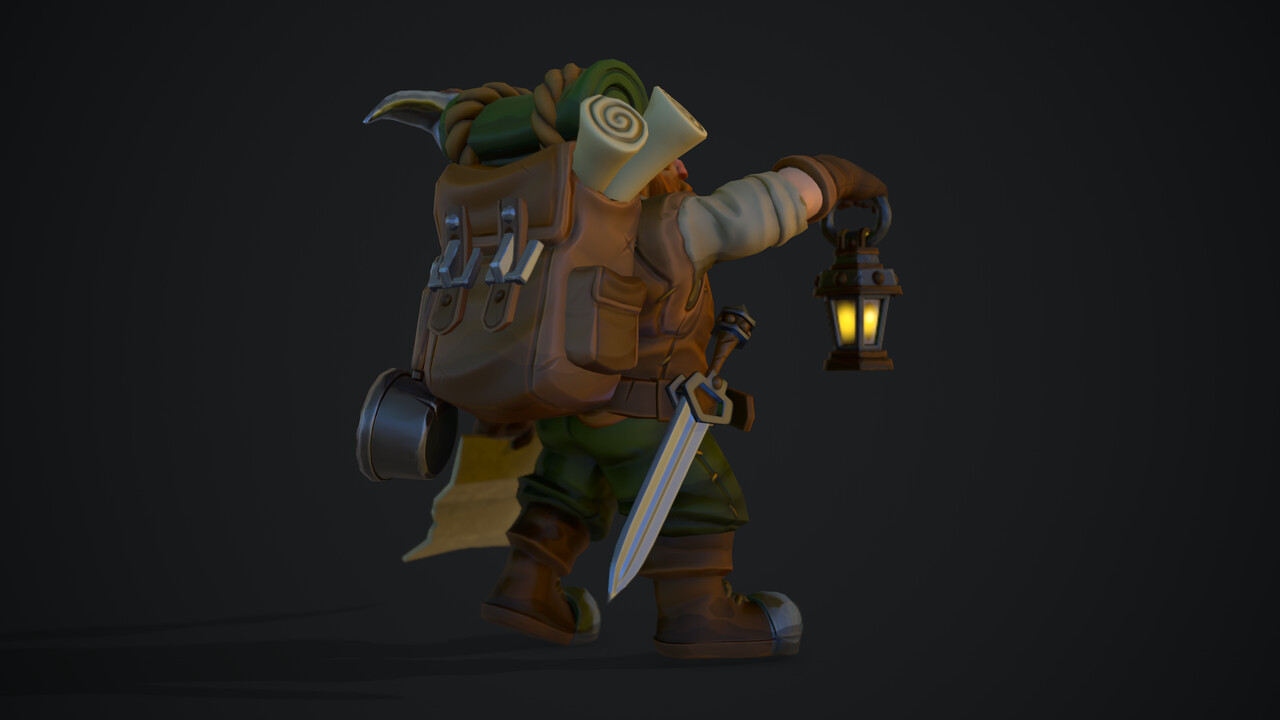 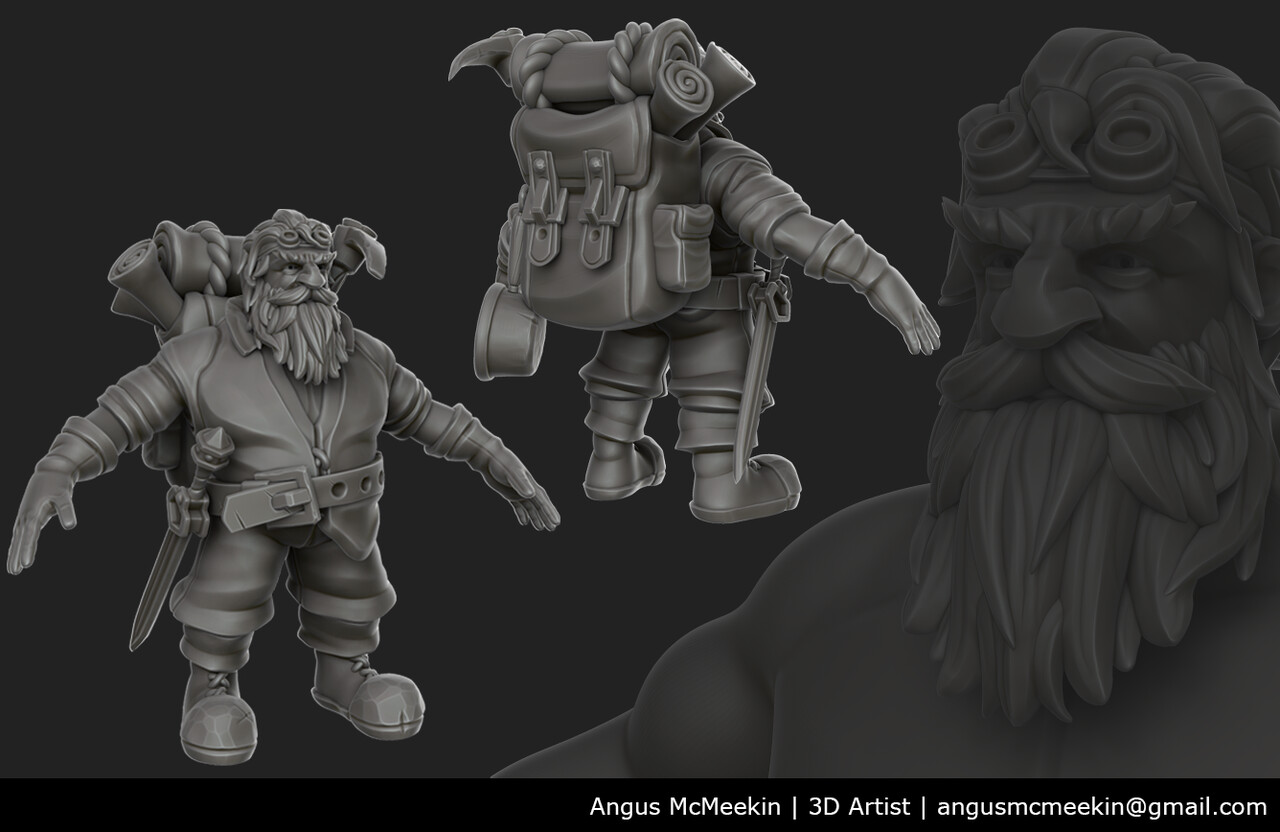 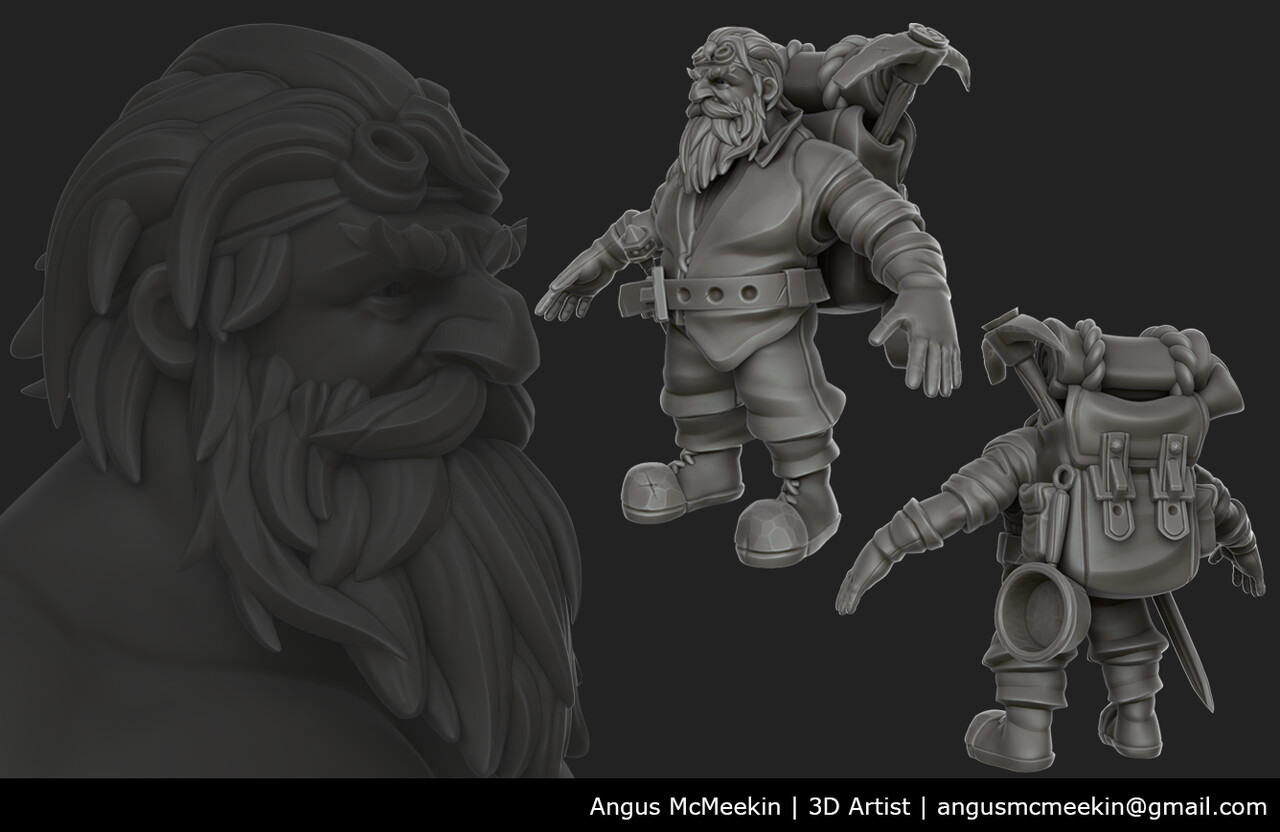 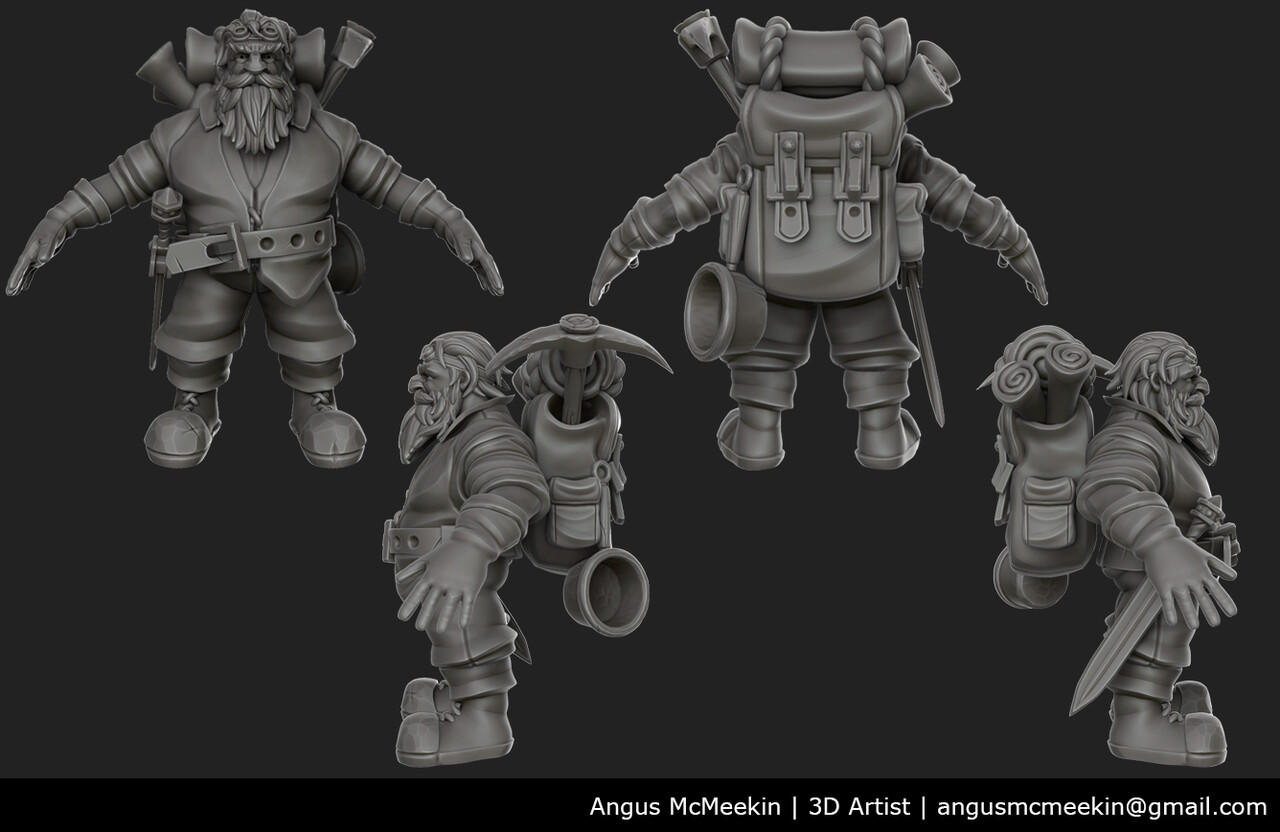 Since my first WIP update I've made quite a bit of progress on my Dwarven Explorer. I first moved onto some more backpack/prop assets such as his pickaxe, pot, sword and maps. I also did some some scratch details in elements such as his boots. Below are the final sculpts at the moment. 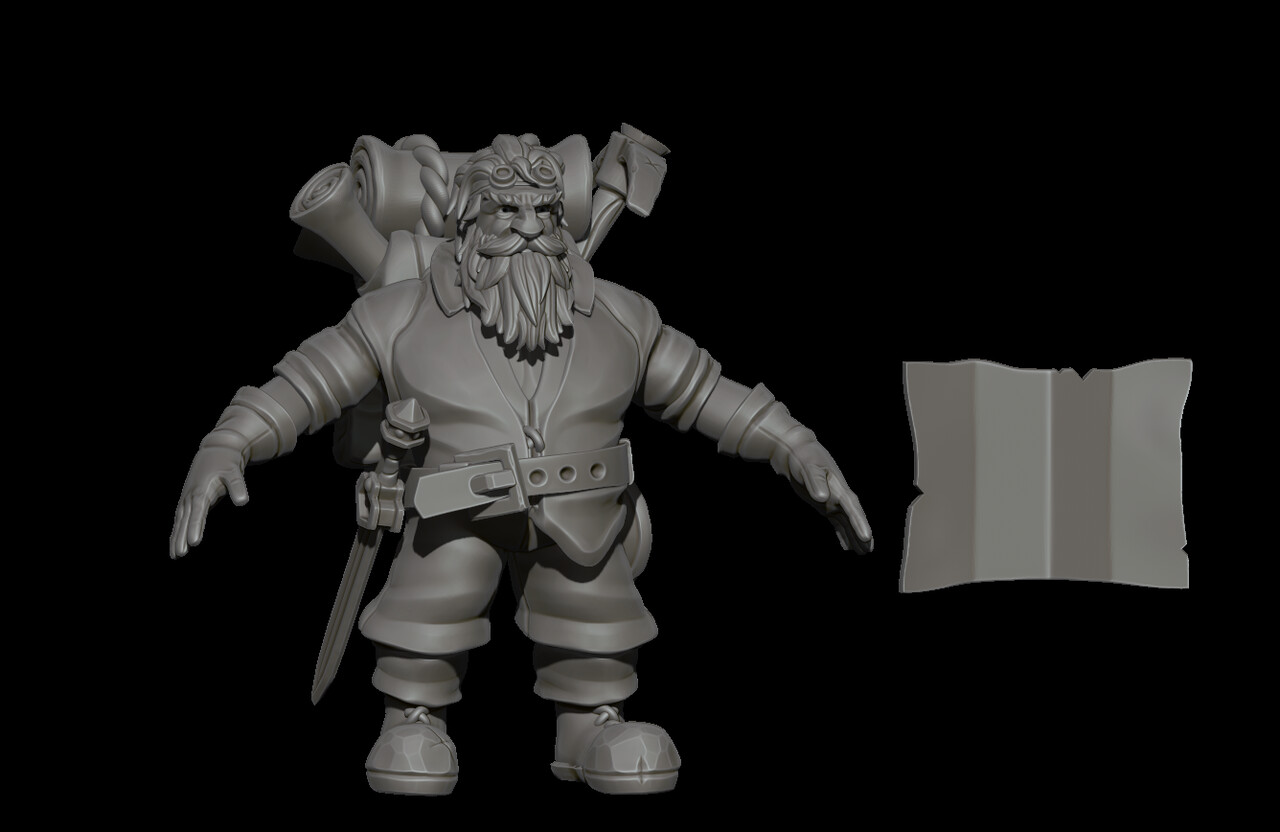 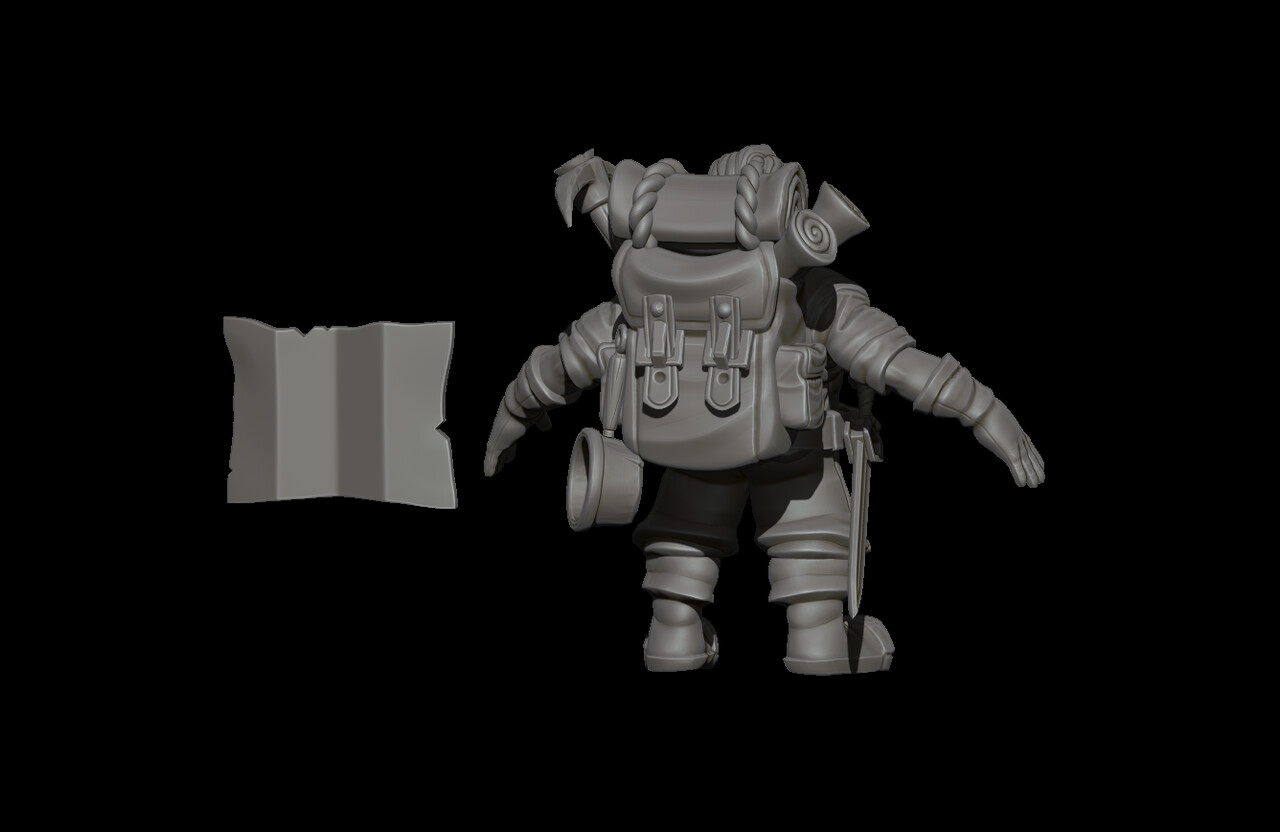 This was followed by re-topology. It went fairly smoothly with the only obstacles faced being his hair/beard and some of the asymetrical elements such as his leather vest. He's sitting at about 20k Tris including all backpack/prop assets. There's some room for optimization here so I may reduce this further down the line. Below are some previews of his wireframe. 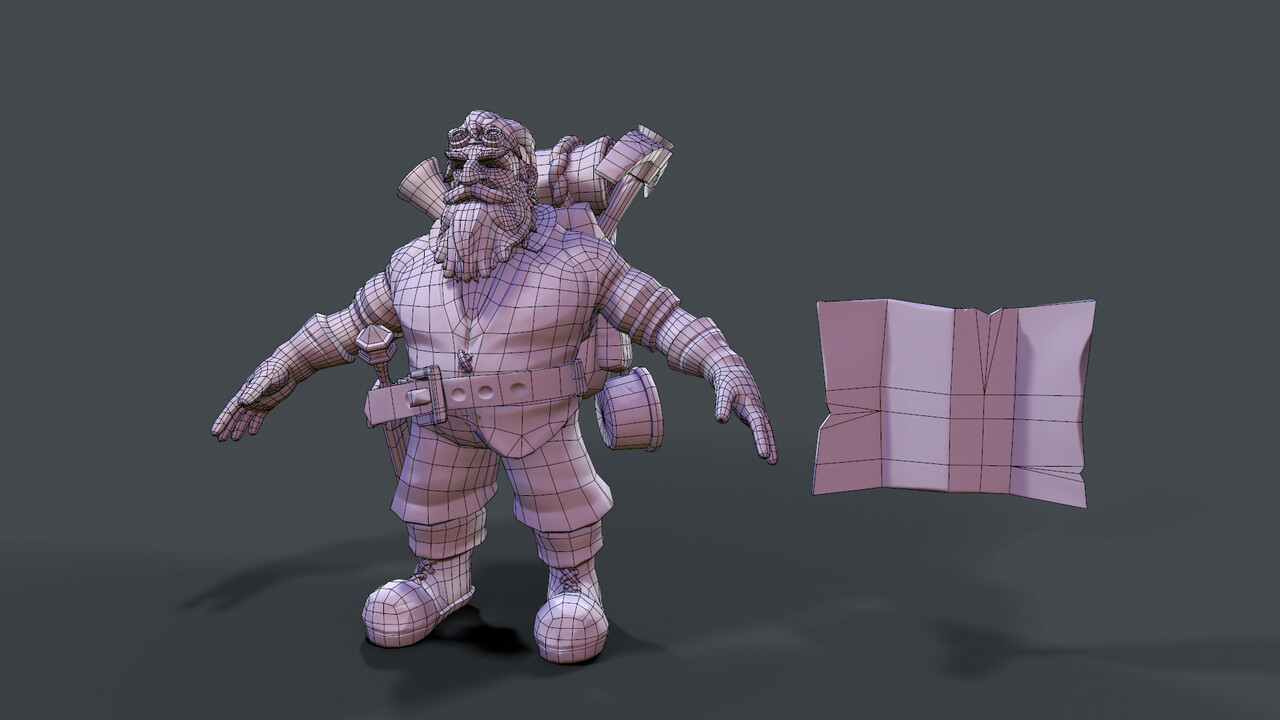 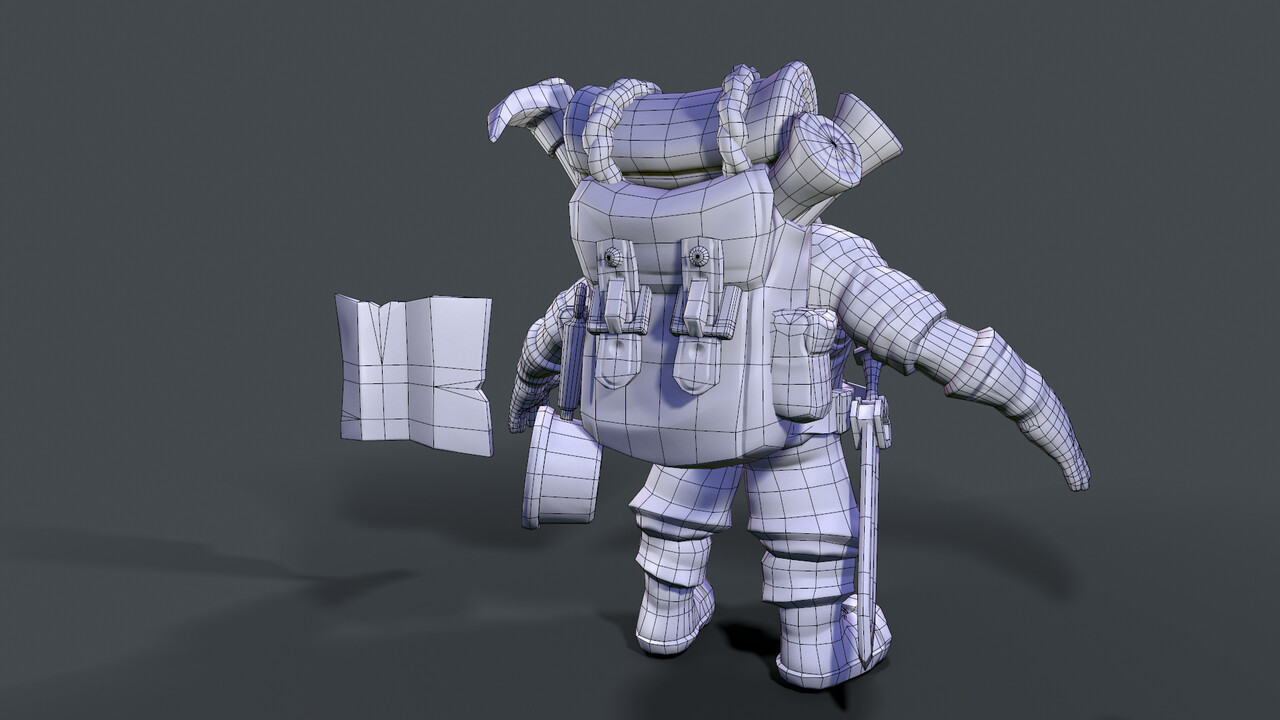 Next was UV Unwrapping which thanks to a smooth retopo, didn't take long at all. I'm now currently working on his textures within Substance Painter. I've got some additions I'd like to make and gathered some feedback from friends so he's not quite final at the moment. His belt and bedroll for example are a bit too smooth at the moment. I'll likely fix this with some cracks and creases. Below are some Marmoset renders of his current look. 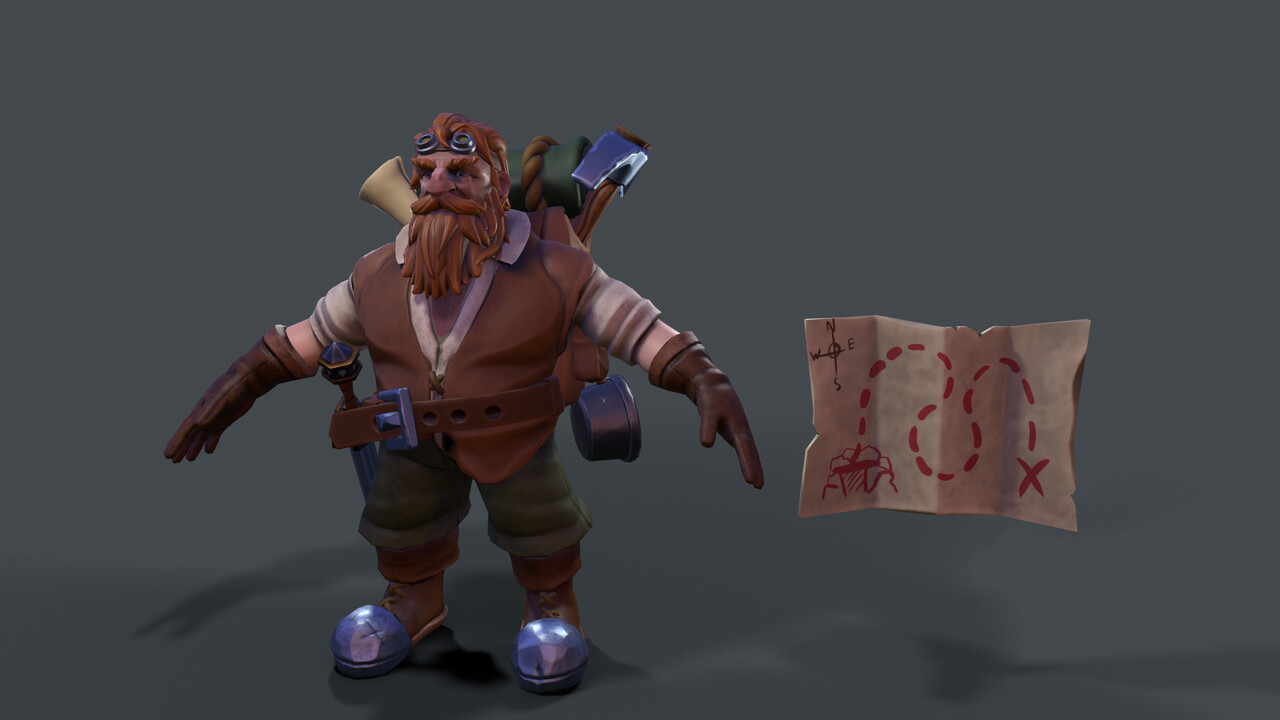 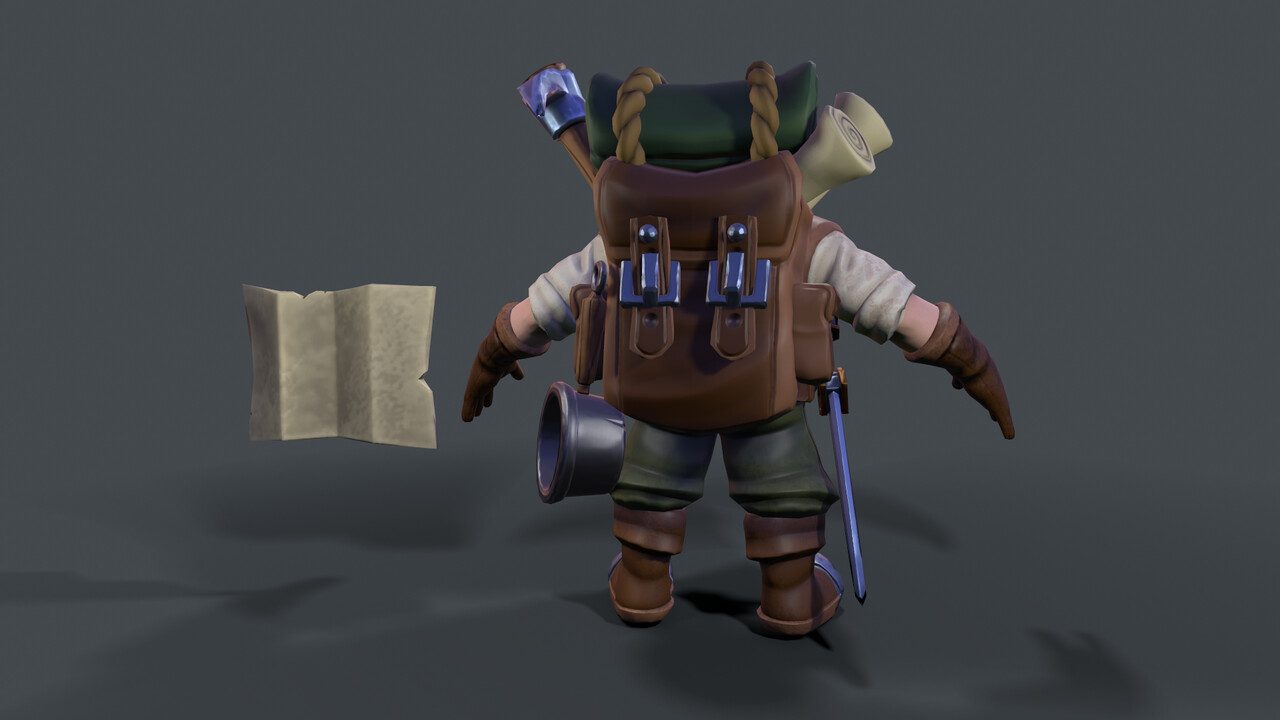 I've also been torn about his hair and whether to have him bald or not. I may just end up doing a few renders of his possible hair/beard/moustache combos as they are quite a few I'm fond of. Below are some previews of my favourites. 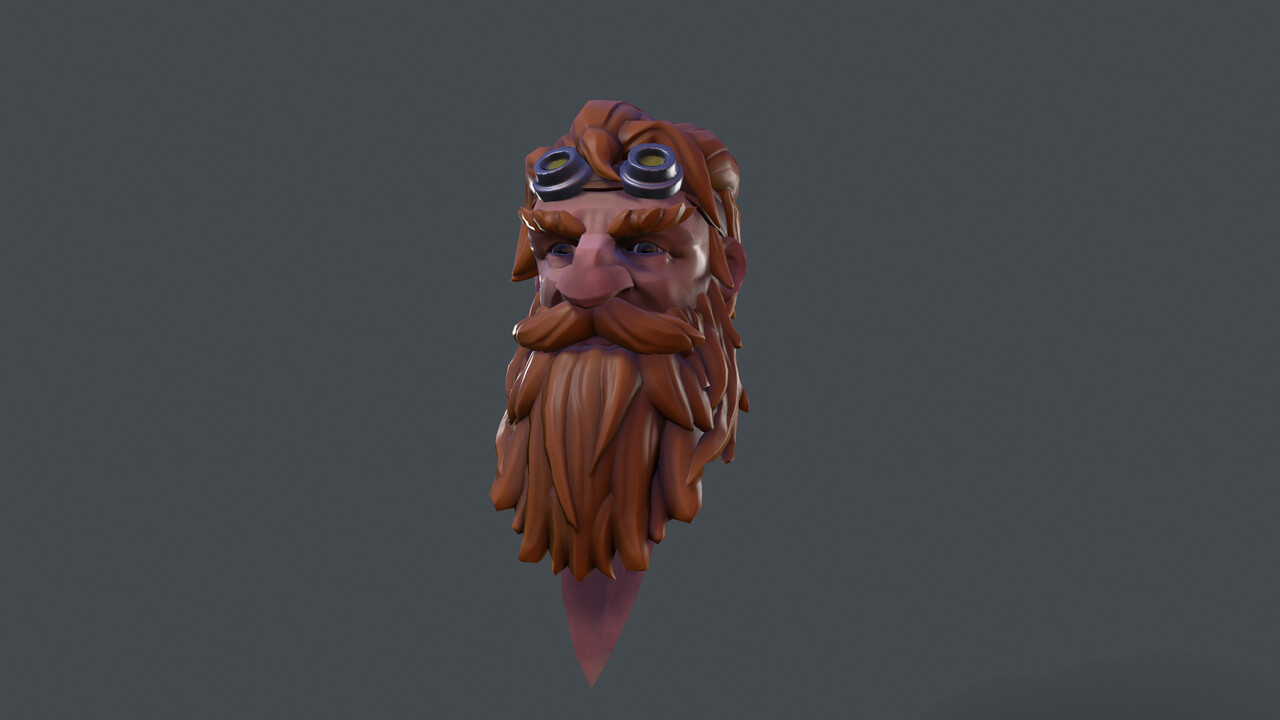 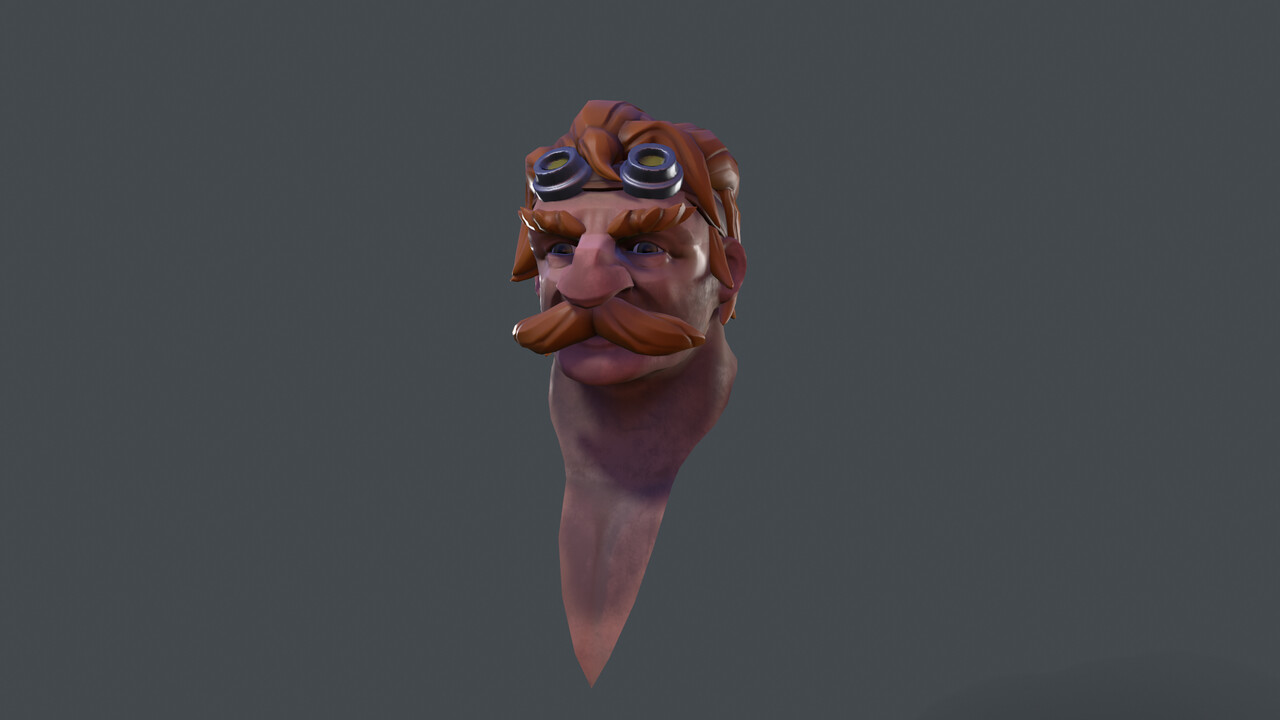 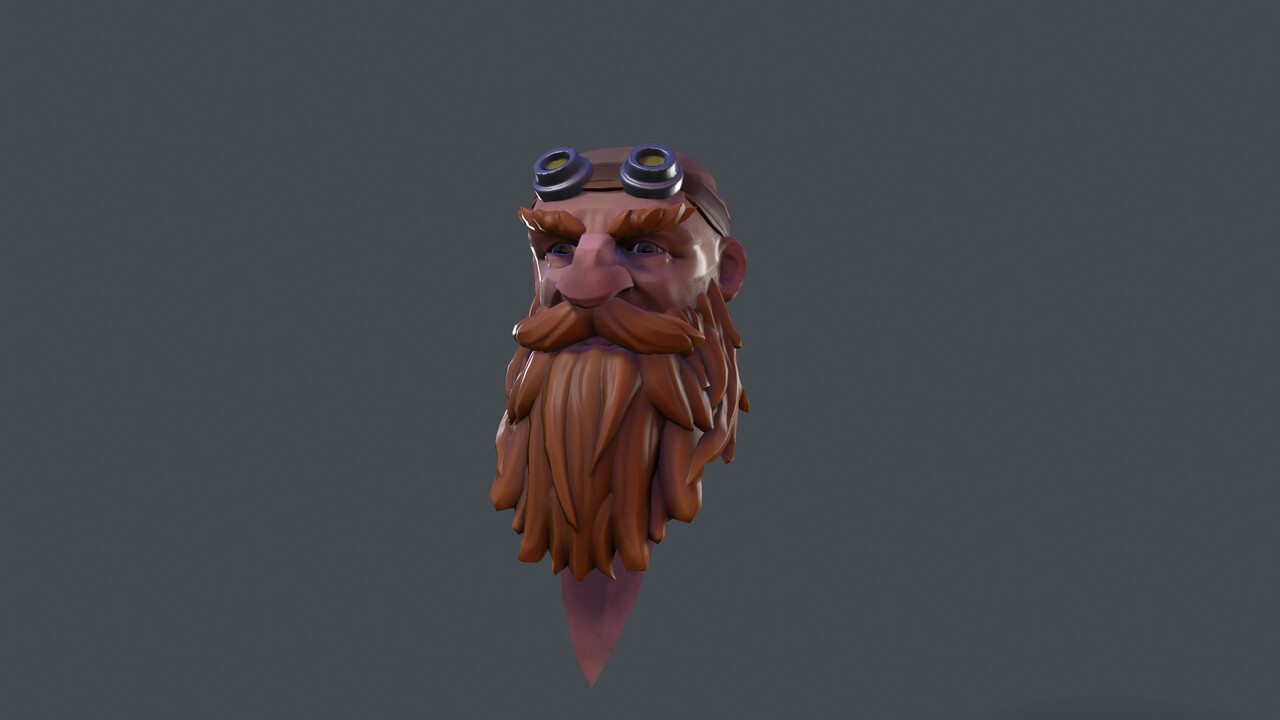 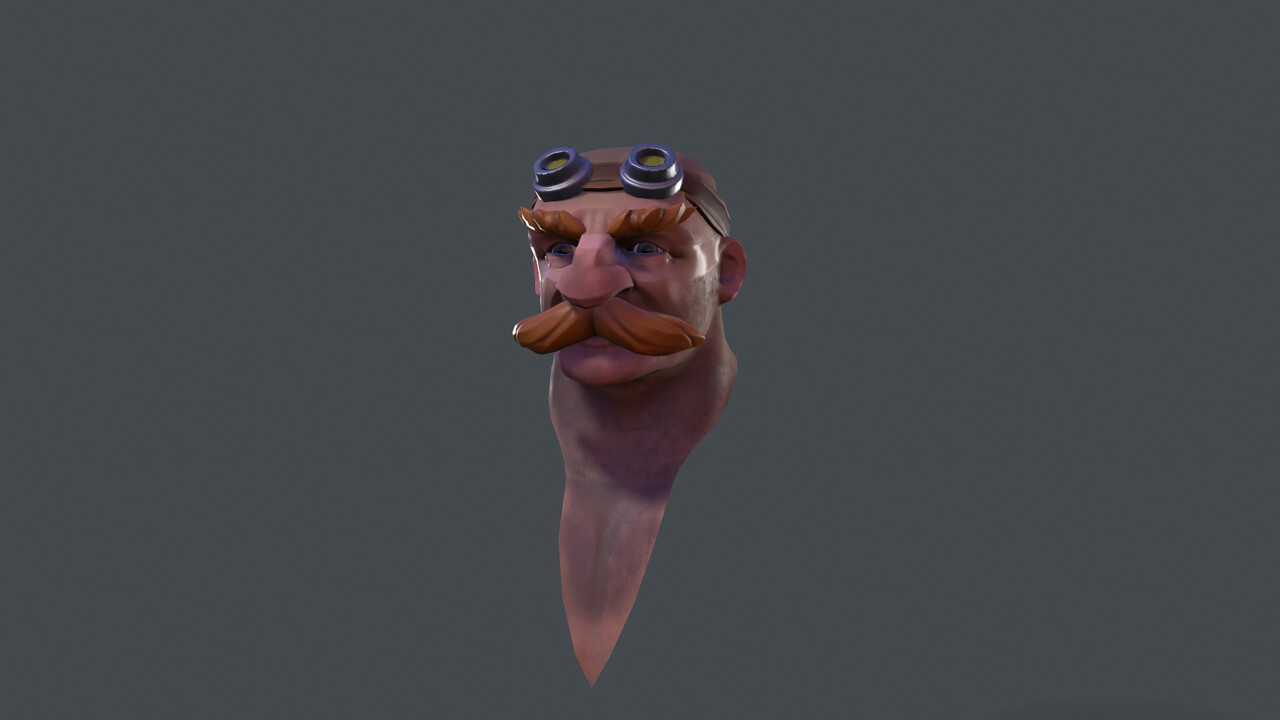 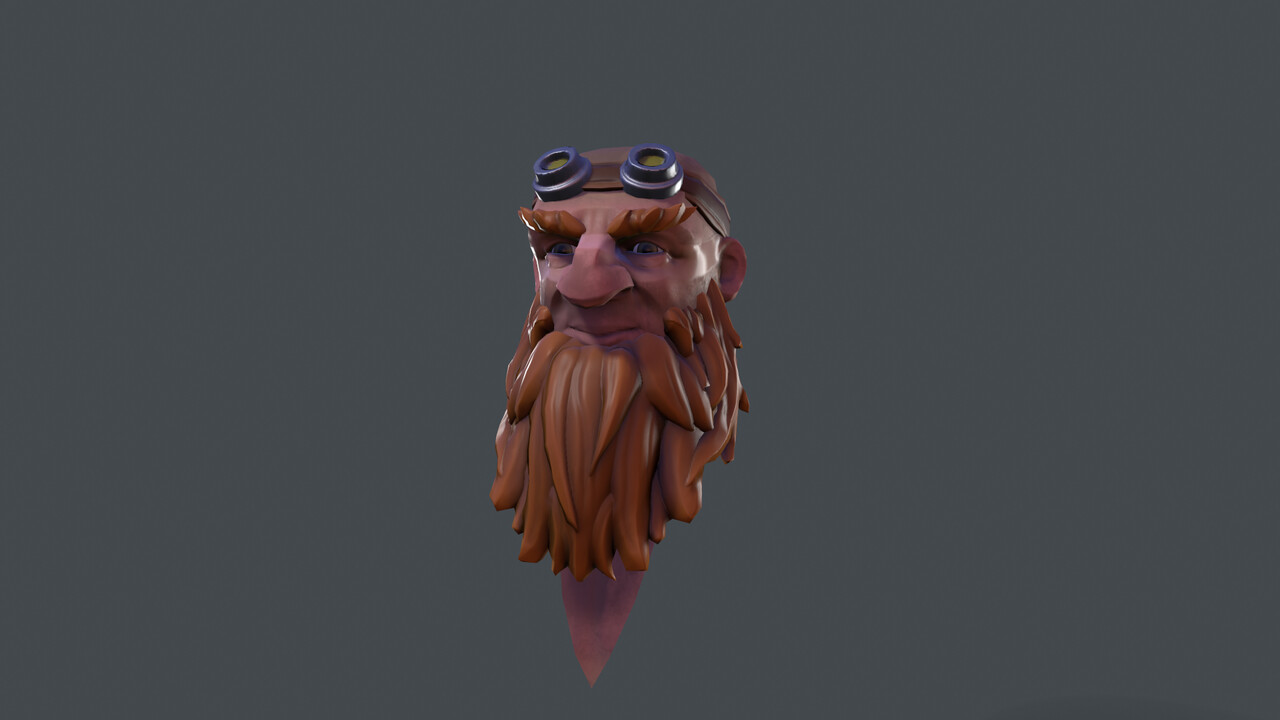 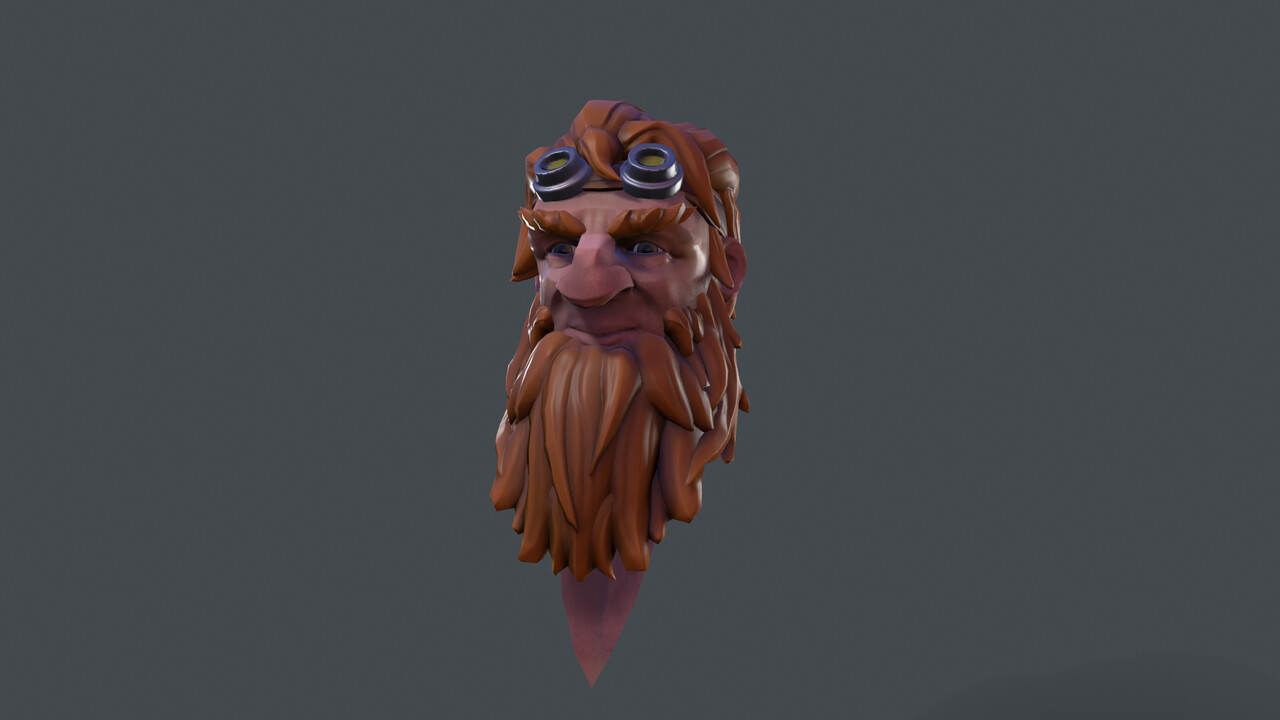 Overall, I'm really happy with how it's going so far. A stylized PBR character has been on my to-do list for sometime and to have it accompanied by a whole environment is even better. My next update should be much sooner as he's very near completion so stay tuned for the possible published project.

Thought I'd share some of the progress shots of my character that's going to play a big storytelling role in my Fool's Gold environment. Below are some shots from his development.

I started by defining a rough muscle shape and focusing on getting his face looking good. Much of his muscle wouldn't be visible but I still wanted to get the proportions right. At this point he was a bit too tall, which I fix up soon. I also thought that if I got his body to a good standard, that I could reuse or expand upon it in later projects. 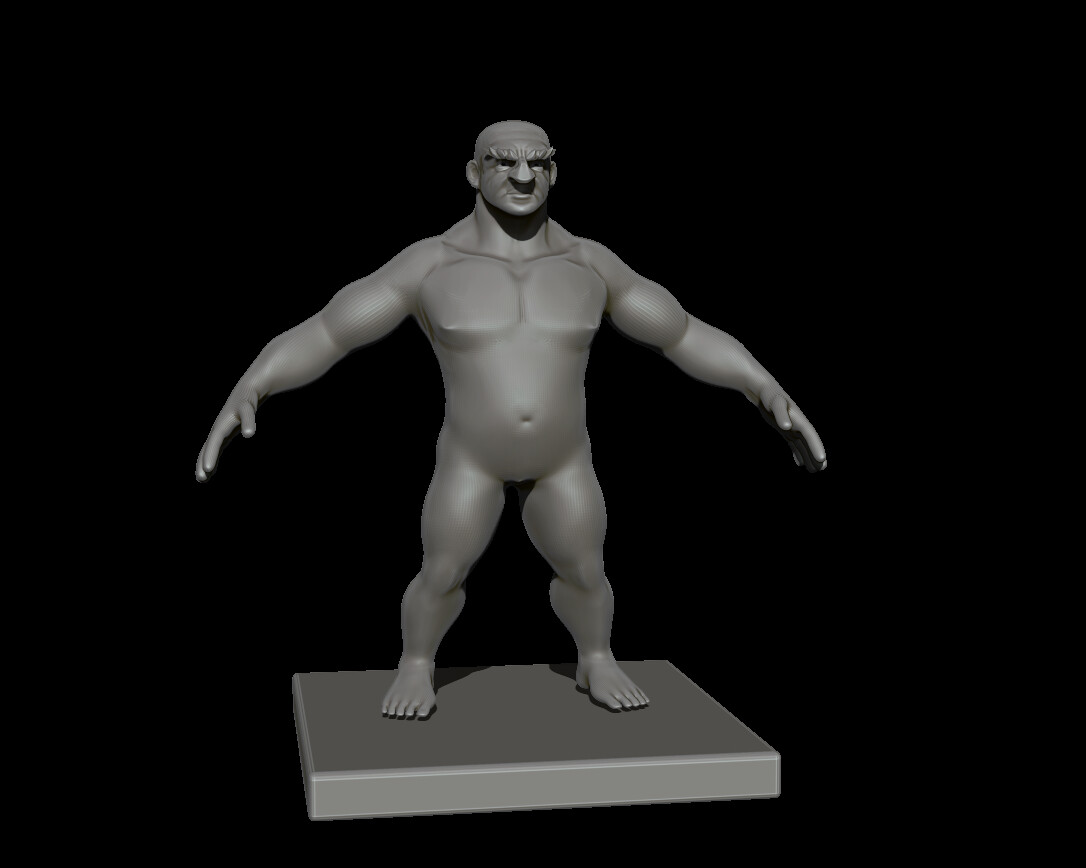 I shortened him a bit and expanded upon his face, giving him a friendlier look, sloping out his forehead and  defined it using pinch and flatten brushes. 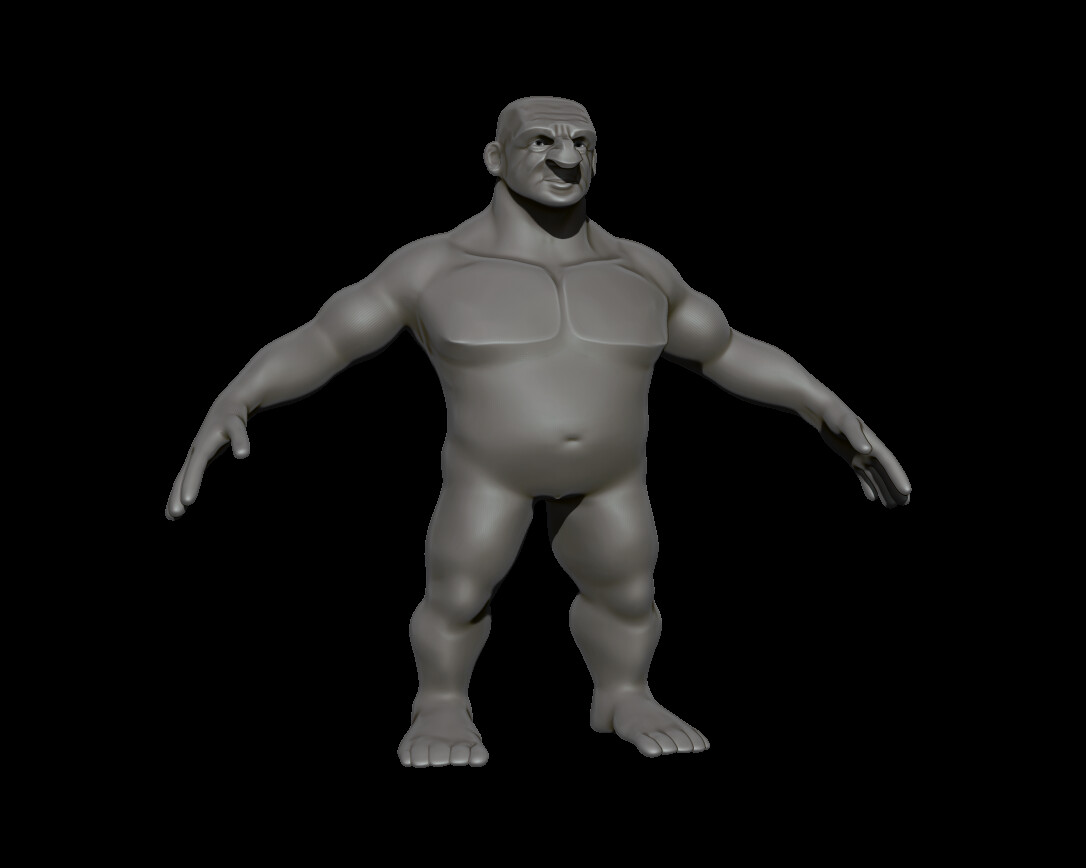 I tried out a new approach for hair which I'm really happy with. His eyebrows still use my old approach but I think the new method works great for larger volumes of hair such as beards and head hair. It uses a combination of IMM appendages which are then shaped using pinch, crack and hard polish Brushes. 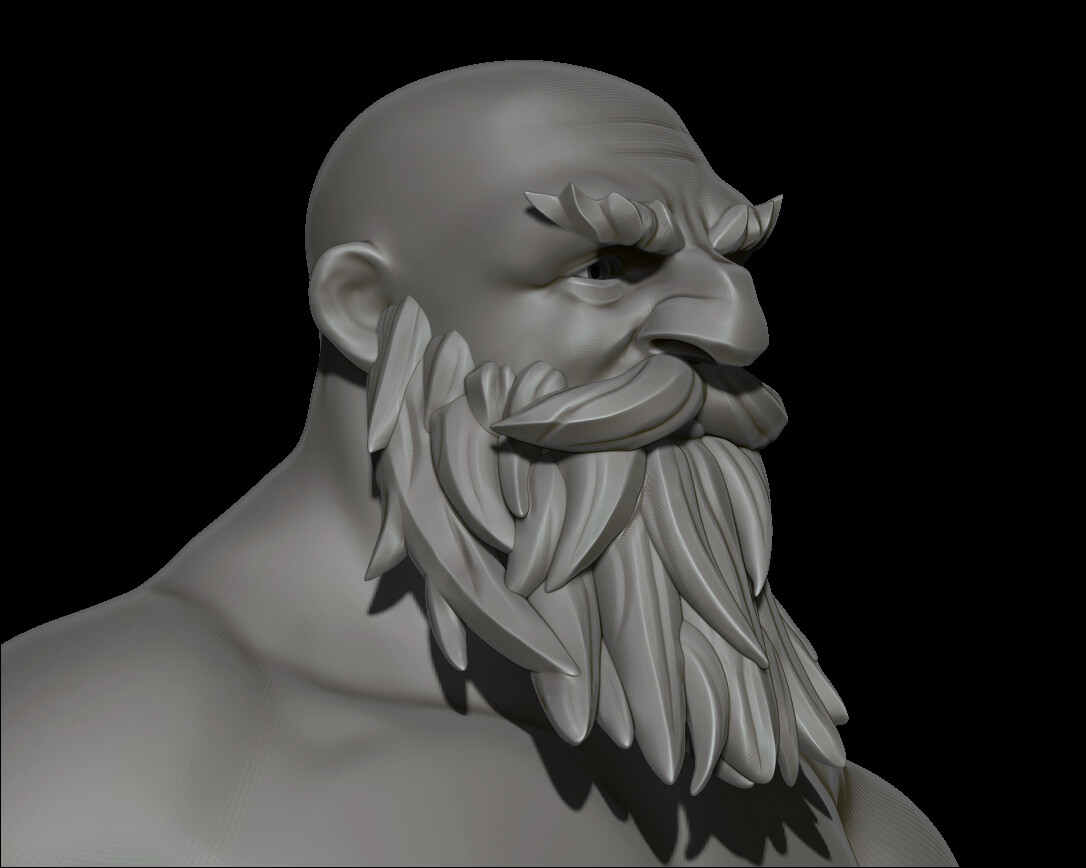 His clothes were mostly masked and extracted then defined using pinch and cloth brushes. components such as the goggles and belt were made using ZModeller then remeshed for finer details. 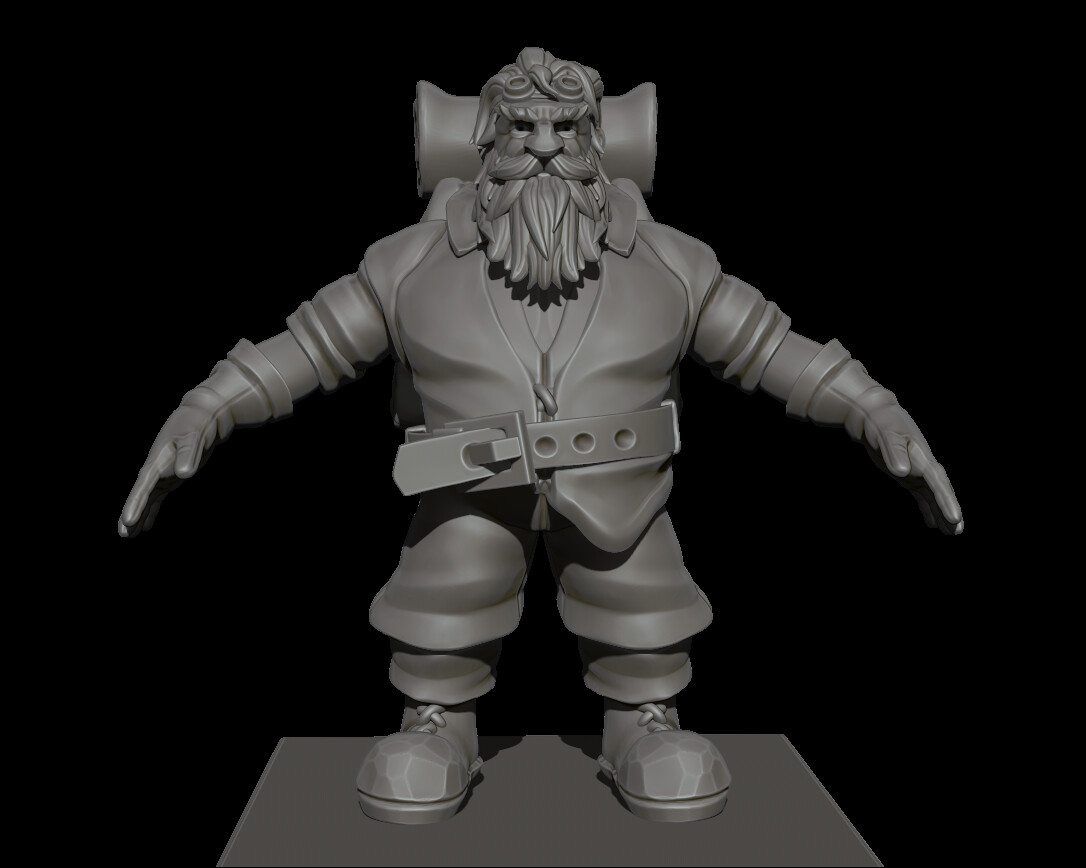 The brushes I use the most are Clay Buildup, Form Soft, Move, Flatten, Hard Polish, Standard, Dam Standard as well as Michael Vicente's cracks brushes and Shane Olsen's pinch and cloth brushes. 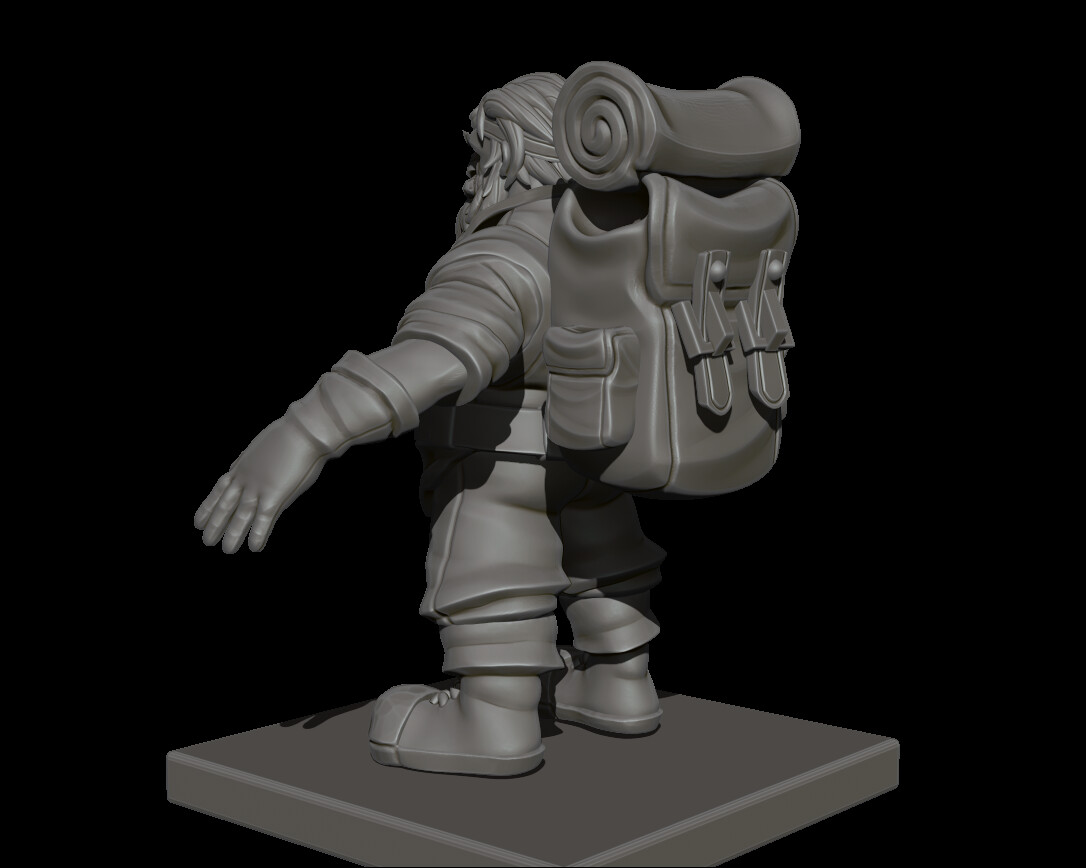 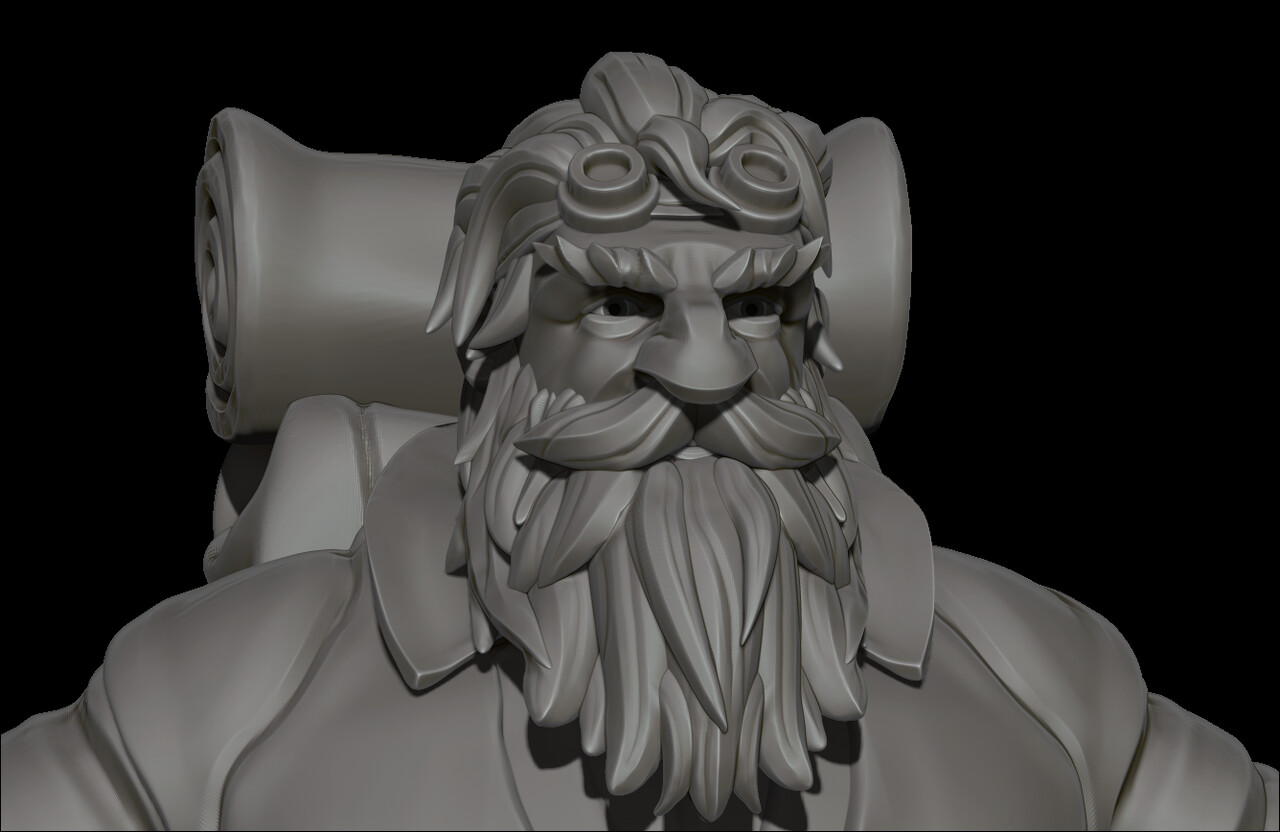 Still working on him and refining bits and pieces. Hopefully you enjoy, feedback is appreciated.